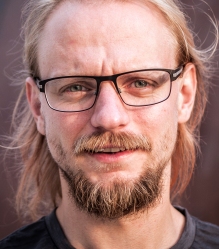 I am thrilled and honored to announce an expansion to the Open Humans team!

Bastian Greshake Tzovaras will join us starting November 1 as Director of Research at the Open Humans Foundation. He is funded by a fellowship from the Open Humans Foundation to support his work pursuing our shared vision of advancing citizen science and open approaches to health and human subjects research. Before Bastian starts, I’d like to to tell you more about him – even if you think you know him well!

To many Bastian is best known for openSNP, a project he co-founded in 2011 with Philipp Bayer – and joined soonafter by Helge Rausch. OpenSNP invites individuals to donate and publicly share their genetic data (e.g. from 23andMe and AncestryDNA). OpenSNP members can also contribute additional data, including crowd-sourced trait surveys. It is a community and platform that matches the themes of the Personal Genome Project and Open Humans.

I think OpenSNP has been an impressive success. On a small crowd-funded budget, Bastian, Philipp, and Helge helped more than 3,700 individuals to publicly share their genotyping data. I believe this is more publicly shared human genotyping data than all other projects combined!

Finding some way to join forces with Bastian seemed obvious and overdue. And so, I reached out. Because for Open Humans to succeed as a shared vision, it needs more than just me.

And as I got to know Bastian better, I realized how profoundly dedicated he is to broad and resonant themes – of personal data sharing, citizen science, participatory research, open access, and open science. He has published research about personal data sharing behavior, participant-led research, analyses of Sci-Hub usage, open peer review, and open science tools – in addition to his thesis work with lichen metagenomics! He serves on the committees for the Bioinformatics Open Source Conference (BOSC), OpenCon Berlin, and a FORCE11 workgroup. He has worked with with Mozilla Science Lab to mentor open science projects, run workshop sessions, and teach participatory/open science approaches. He attends, speaks, and presents at numerous events and meetings – BOSC, MozFest, Creative Commons, Sage Assembly, OpenCon, and more.

In summary, OpenSNP was just one facet of Bastian’s prolific and wide-ranging dedication to open approaches and social change in how we perform research. His vision matches that of Open Humans, and his strengths complement mine.

Bastian’s work with Open Humans will focus on the following areas: sustainable approaches for citizen science and patient-engaged research, collaborations and outreach for participatory research projects, mentorship and support for projects, and academic engagement via collaborations, publications, and meetings. I suspect he’ll get involved in almost everything, as his skills and interests are so diverse!

It is an honor to have Bastian joining Open Humans. I am eager for him to begin, and I look forward to his work with Open Humans in the coming year – and, if all goes well, years to come. Together we can endeavor to grow an open ecosystem – one that is thriving, sustained, and expands the world with something powerful and new.